Company founders and families selling to private equity: Every third MBO from succession

Company founders and families selling to private equity:
Every third MBO from succession

Frankfurt am Main, Germany, 25 January 2018. Private equity is becoming increasingly acceptable among German “Mittelstand” companies. This is reflected in the fact that company founders and families make up a large proportion of those selling companies to financial investors. One in three MBOs in the mid-range segment of the German buyout market was a succession agreement in 2017. This is, by quite some margin, the largest share ever recorded. Last year, financial investors structured a total of 35 management buyouts of German SMEs – one more than in 2016 and just one less than in 2007, the year with the highest market activity to date. In more than half of these transactions (19 out of 35), financial investors were active on both sides, both as sellers and buyers. This also represents a new peak figure since Deutsche Beteiligungs AG (DBAG) started analysing the market in 2003. With five cases in 2017, corporate demergers were the exception. “Both factors – the increasing acceptance of private equity among founders and entrepreneurial families and the high proportion of secondary buyouts – reflect the increasing maturity of the German private equity market,” explained Torsten Grede, Spokesman of the DBAG Board of Management, speaking to journalists in Frankfurt am Main on Wednesday evening.

The analysis only includes transactions in which financial investors have acquired a majority stake in the company in conjunction with the management and that exhibit a transaction value of between 50 and 250 million euros in respect of a debt-free company. It is based on publicly accessible sources, as well as estimates and research compiled by DBAG in collaboration with FINANCE. Last year, private equity firms funded buyouts to the tune of some 4.4 billion euros among German “Mittelstand” companies, the highest level in the past 15 years. In 2016, the total transaction volume came in at 3.6 billion euros. The average company value rose by 20 per cent to around 126 million euros.

Unlike in 2016, the majority of transactions (18 out of 35) related to the upper portion of the segment (company values of 100 million euros to 250 million euros). More than half of the transactions (19 out of 35) were structured by multinational, pan-European private equity funds; in the prior year, these funds accounted for a share of below 40 per cent.

Deutsche Beteiligungs AG appears on the list of buyouts in 2017 with two MBOs, once again making it one of the most active private equity investors in the market segment under review. DBAG has been involved in 20 transactions in the past ten years – more than any other financial investor.

Private debt funds more than just a fad – “Their market share of buyout financing will increase”
When it comes to funding their transactions, private equity managers are increasingly turning towards private debt funds as an alternative to traditional bank financing. Three quarters of investment managers expect the market share of loan funds in buyout financing to increase. This was indicated by a survey of investment managers from more than 50 private equity firms operating in Germany. Every six months, industry magazine FINANCE asked the investment managers surveyed about trends in the German SME segment on behalf of DBAG. Recently (Q3 2017), almost a third of transactions (including large buyouts) were financed in conjunction with a loan fund. Competition between these funds and banks has caused fees and interest margins for buyout financing to fall. In the survey conducted at the end of 2017, half of investment managers stated that they expect conditions to improve further. 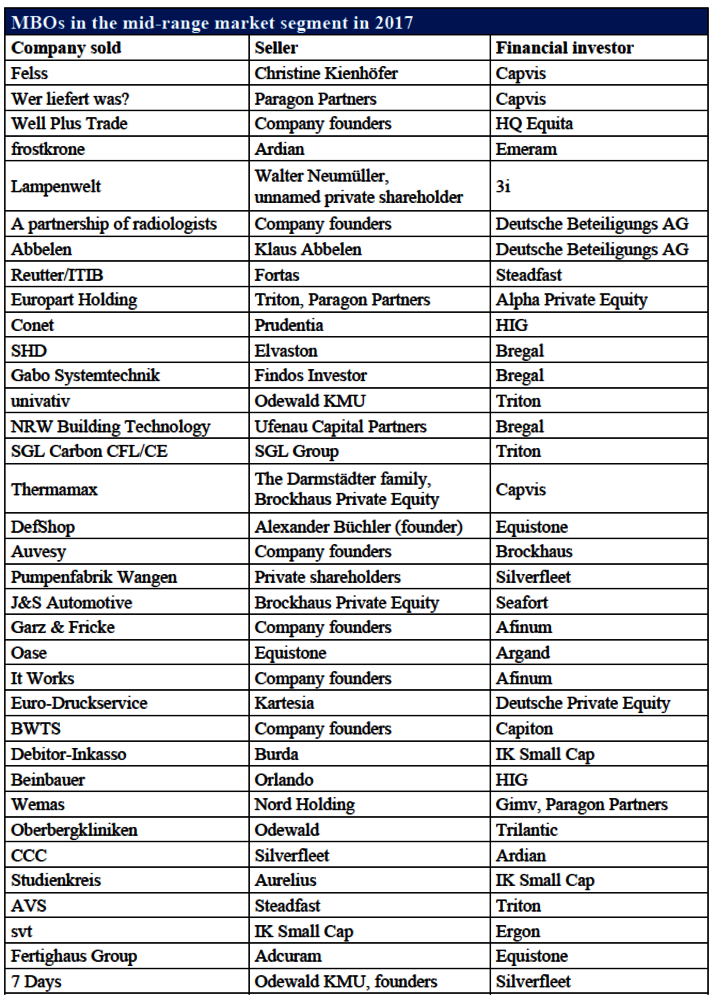 Increased supply on the debt financing side is being accompanied by a sustained cash inflow for private equity funds. The financial investors are seeking strong progress in investment activity. The increased competition for virtually the same amount of companies for sale is resulting in an increase in valuations – which is something that has been witnessed for a long time. According to the survey, competition among providers is now rated at 8.6 on a scale of 1 (very low) to 10 (very high), which is up significantly on the prior year (8.0). Nevertheless, the range of available investment opportunities is regarded more positively than in previous years. “The underlying conditions for our business are fundamentally good,” said Board of Management Spokesman Grede. “The economy as a whole is on an upward curve and there is still considerable capital available, due not least to the capital provided by private debt funds on the debt financing side.”

DBAG made equity investments to the tune of 242 million euros in 2017
In 2017, Deutsche Beteiligungs AG structured seven management buyouts for funds which it advises. Two of them, the MBOs for the Radiology Group and for Abbelen GmbH (now part of More than Meals), are included in the statistics mentioned; the five other MBOs are allocated to other market segments. In this respect, DBAG made equity investments totalling approximately 242 million euros. The company has access to two funds for investments in SMEs: DBAG Fund VII – the largest German private equity fund for “Mittelstand” investments, with capital commitments of one billion euros – is able to release up to 200 million euros of equity per transaction; one year after the start of the investment period, more than 20 per cent of the fund has been drawn down. DBAG ECF holds majority and minority stakes in companies with low company values. It focuses primarily on owner-led SMEs and offers outstanding flexibility thanks to a broad range of investment options. This flexibility is especially important for entrepreneurs who are focused on the holding size and holding period.

Value appreciation becoming more challenging
DBAG takes the view that there will be no fundamental changes to the market situation in 2018. “By virtue of the strong underlying conditions, we continue to expect a high level of market activity in 2018,” remarked Board of Management Spokesman Grede. “Given the rising price level, the challenge remains substantial in terms of selection and implementation of growth appreciation strategies for portfolio companies – such as expanding product range or tapping into new geographical markets.”

For more information and the complete results of the market survey and statistical analysis, please click here.