Frankfurt am Main, 25 January 2017. Pricings in the German private equity market are currently “expensive”, but, overall, not yet “dangerously excessive”. That is the opinion of investment managers at more than 50 private equity firms operating in Germany, who are polled twice a year on behalf of Deutsche Beteiligungs AG (DBAG) by FINANCE magazine about trends in the German mid-market segment. In some areas, however, the professionals interviewed see a risk of excessive valuations. In particular, the prices for medical engineering and technology companies are now so high that there is a threat of a bubble forming in these sectors. By contrast, trading firms are considered the least over-valued, along with automotive suppliers and mechanical and plant engineering companies. In the survey conducted at year-end 2016, only five percent of the investment managers interviewed stated that valuation levels were “normal when compared over the long term”; 86 percent termed prices as being “expensive”. Eight percent of the respondents even consider prices to be “dangerously excessive”.

Irrespective of this assessment, financial investors structured more buyouts in Germany’s “Mittelstand” in 2016 than they had since record year 2007. Half of the transactions – 17 out of a total of 34 – related to sectors in which the price trend has been less dynamic recently. Every fifth transaction (seven of 34) involved an automotive supplier. Compared to the preceding year, the proportion of industrial companies among mid-market buyouts declined: in 2015, they accounted for approximately half of the 30 transactions, and in 2016 for only about a third.

DBAG most active “Mittelstand” buyout investor over more than ten years
The data issued yesterday relates exclusively to majority takeovers by financial investors in which the target company’s management co-invests and which have a transaction value of 50 to 250 million euros for the debt-free company. The data is based on publicly accessible sources as well as on estimates and own research by DBAG in collaboration with FINANCE magazine. Deutsche Beteiligungs AG is present in this year’s statistics with three buyouts, making it again one of the two most active financial investors for private equity in the relevant market segment. DBAG also ranks first on a ten-year comparison, with 18 transactions.

Ten of 34 transactions aimed at arraging succession
An unusually high number of buyouts originated from family-owned companies in 2016. In ten instances, or in nearly every third case, succession was arranged through a buyout in the role of the majority owner, in two of these instances by DBAG. This represents by far the highest share of family succession arrangements through buyouts in 15 years. 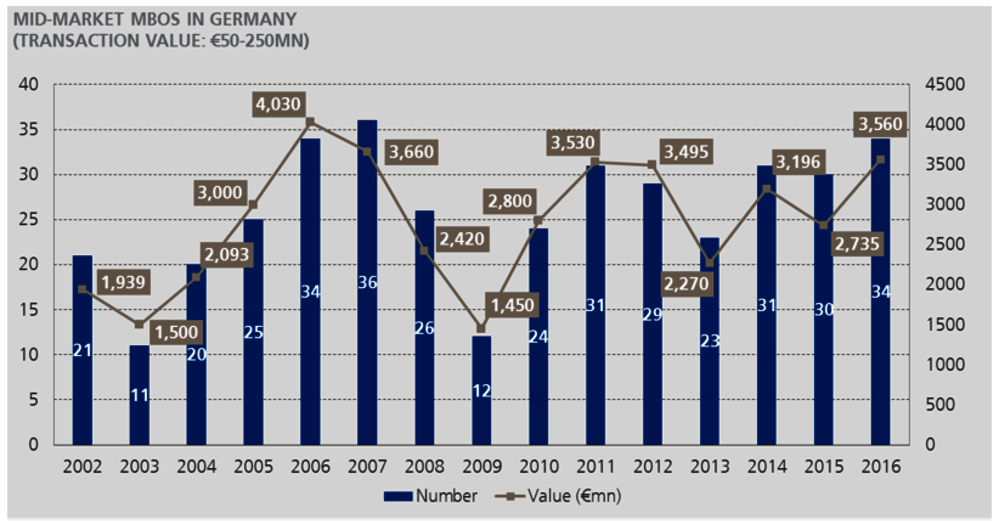 “The significantly greater number of family succession arrangements shows that financial investors are evidently increasingly being accepted as company owners in the “Mittelstand”, said Torsten Grede, Spokesman of the Board of Management of Deutsche Beteiligungs AG, commenting on the newest market survey to journalists in Frankfurt yesterday. In the past, the share of family succession arrangements was only about ten percent.

DBAG also ascribes this greater acceptance to the fact that financial investors are visibly relying on sustainable strategies to a growing extent in order to support managements in developing the companies and thereby increasing their value. “It has become evident in ever more cases that financial investors create positive momentum in companies”, Grede added. “With a focus on strategic expansion through additional businesses and services, our own efforts to develop our portfolio companies are taking on greater depth.”

In addition to the four buyouts previously mentioned, Deutsche Beteiligungs AG also entered into two minority investments in family companies in 2016 alongside its funds, initiating total equity capital investments of about 300 million euros. DBAG has two funds for mid-market investments at its disposal: DBAG Fund VII raised last year – with capital commitments of one billion euros the largest German private equity fund for mid-market investments – is able to make equity investments of up to 200 million euros per transaction. With a volume of 212 million euros, DBAG ECF primarily addresses owner-managed “Mittelstand” companies and, through a broad range of financing types, provides a high degree of flexibility, which is of particular importance to owner-managers in terms of the size of the interest held and the holding period. In additional to minority stakes, the fund can also take controlling interests within the scope of smaller buyouts (equity capital investments from some ten to 30 million euros) in select cases.

Proprietary transactions and development of the investments gain in importance
DBAG does not anticipate that the market situation will change fundamentally in 2017. “The continuing stream of capital channelled into the asset class of private equity is creating high demand for attractive companies, along with high price levels,” said Spokesman of the Board Grede. In this environment only those private equity companies have good prospects of successfully concluding transactions that have proprietary access to attractive investment opportunities and have intensively analysed companies’ development options: “Those wanting to prevail and meet their return targets must, however, not only possess a good understanding of the company and its potential. They must also be very conversant with the challenges associated with change processes in companies.”

Please find further information in the presentation of the press conference 2017 here.