Did the virus also infect the M&A market in the DACH region? The market ground to a halt in March: ongoing transactions were called off and the parties involved seemed to go into a collective state of shock. And now that we have the market data for the first half of the year, statistics show the impact: in Germany, from January to June there were just 236 M&A transactions across all size brackets – the lowest seen since 2011. The number of PE transactions – 94 in the first half of 2020 compared to 113 in the first half of 2019 – was also the lowest since 2016. These findings are based on a market survey carried out by EY's private equity consultancy team.

In the meantime, however, it seems that this state of shock has passed: around six months after the outbreak of the pandemic in Germany, the economy is set for a rapid and broad-based recovery. Tom Alzin, a Managing Director at Deutsche Beteiligungs AG, shared his views during the DBAG Capital Markets Day in early September: “We are seeing excellent opportunities for DBAG to further expand its portfolio.”

The extent to which the pandemic initially hit the market can be seen from the number of investment opportunities in the SME sector that the DBAG investment team handled during the spring months. In light of these figures and the challenging economic environment, especially for export-oriented companies, there was good reason to be pessimistic about the future. Since June 2020, the number of investment opportunities in DBAG's target markets has seen a sharp increase. This is also demonstrated by the fact that the DBAG team successfully structured four new management buyouts (MBOs) within just a few weeks during August and September. He added: “Our transaction pipeline is very well filled. We immediately switched back to deal mode after the brief lull and continue to be involved in fruitful discussions,” explained investment manager Tom Alzin. His view is shared by others. In recent weeks, a number of prominent figures in private equity have also stated that they are very optimistic in their outlook for the market. 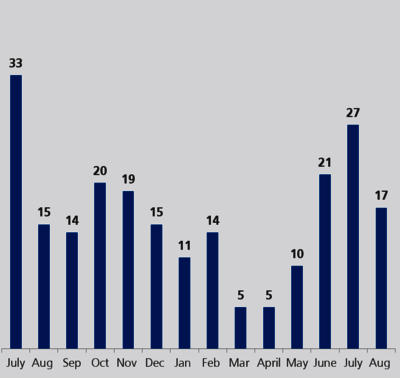 Even if the M&A industry is counting on a recovery, it is still worth taking a more detailed look behind the scenes. The situation is very different for some sectors of the economy, however, due to the impact of the corona pandemic. Areas that were already struggling before the global crisis are now facing even greater challenges. The automotive sector is one example; the hospitality and entertainment industry has also been severely affected.

The pharmaceutical and healthcare sector is one of the big winners of the crisis. This is no great surprise, given that we are in the midst of a crisis caused by a virus pandemic. The European market for technology, media and telecommunications (TMT) has also come through the pandemic relatively unscathed: as a result, the number of M&A transactions remains very high among companies in this sector. DBAG's investment team is actively – and selectively – increasing its exposure here, with a focus on companies providing broadband telecommunications and IT services/software. Overall, DBAG is continuing to pursue its strategy to further diversify its portfolio.

New forms of financing on the rise

In times of crisis, it is of course the case that banks are rather cautious when it comes to lending. As a result, it is possible that it may become more difficult, or perhaps even impossible, to finance MBOs on account of higher risk premiums – as was the case after the financial crisis. However, the intervening years since 2008 have produced one major change: the role of private debt funds in structuring company takeovers has steadily increased. This year, their market share in Germany has risen to more than 70 per cent. By comparison, in 2018 the figure was less than half of this, and in 2019 it was only 51 per cent. DBAG is taking advantage of this new option for flexible financing. It also used non-bank financing in part to structure the acquisition financing of its most recent four MBOs – resulting in greater flexibility and better liquidity throughout the transaction process.

The remaining months of 2020 will provide an indication of how the market for company takeovers is developing. Thanks to its high profile among German mid-sized companies and the expertise of its investment managers, DBAG is well placed to make further investments with strong growth prospects.