Frankfurt/Main, 4 July 2019 – Trade war, Brexit, impaired economic prospects, profit warnings and massive price losses on exchanges: an impending market correction appeared to be virtually inevitable towards the end of last year. Half a year later, it has become evident that these market changes have failed to materialise. Participants of the Mid-market Private Equity Monitor, a semi-annual survey conducted by FINANCE magazine on behalf of Deutsche Beteiligungs AG ("DBAG") among investment managers from approximately 50 private equity firms in Germany, have confirmed that valuation levels remain high. At the same time, the financing environment remains extremely favourable for buyers, which is why private equity managers consider themselves as very competitive – relative to strategic buyers – a situation that has rarely been the case before now. According to their assessment, only the deal flow appears to have passed its peak, which might be seen as an omen for an impending turnaround.

According to the survey, 80 per cent of responding private equity managers observed stable or even higher prices for German SMEs, compared to the autumn of last year. Only 20 per cent perceived slightly decreasing prices. A strategy of deferring acquisitions whilst waiting for a price correction thus failed to pay off for market participants. Given the extensive price losses suffered by exchange-listed companies, especially during the fourth quarter of 2018, numerous investment managers had feared a widening gap between buying multiples for public companies and private equity, assuming that sellers in the unlisted M&A market would cling to the high multiples achieved for quite some time. Yet in fact, the underlying valuation multiples have seen parallel development between both segments, according to the trend observed by almost two-thirds of those surveyed; only 37 per cent perceived diverging developments. "A massive collapse in valuations remains off the cards", said Torsten Grede, Spokesman of the Board of Management of Deutsche Beteiligungs AG, "reflecting the fact that the supply of capital remains high – both for equity and debt. Having said that, even companies financed by private equity are not immune to economic trends: the more cyclical a company is perceived by market participants, the more its valuation is going to suffer if negative macroeconomic development is expected."

As the Mid-market Private Equity Monitor has also shown, the M&A market for German Mittelstand companies remains a seller's market: approximately 54 per cent of respondents said the negotiating position of company sellers vis-à-vis private equity investors has not changed significantly – whilst 20 per cent even saw a slight improvement. Yet the absence of a major market correction for private equity has some advantages: according to 54 per cent of investment managers surveyed, the financing environment has not seen any marked changes since the last survey in the autumn of 2018, and thus remains extremely favourable. Around 20 per cent of respondents observed rather lower financing costs – and at the same time, a loosening of documentation requirements.

Private equity managers rate their present competitiveness – relative to strategic investors – at a level seen only once since this survey started: on a scale from 1 (PE being clearly inferior) to 10 (PE clearly superior), respondents rated their position at an average of 5.34. Only once (in June 2018) was this reading higher, at 5.46 – the previous survey (in December 2018) yielded a markedly lower result of 4.87.

This optimistic stance is reflected in the private equity sector's personnel planning: close to half of respondents forecast a slight increase in the number of their companies' investment managers over the next two years. Nine per cent even expect strong growth, whilst 37 per cent are looking to keep staff numbers stable. Not a single respondent indicated plans to reduce staff – an unprecedented occurrence in the history of the Mid-market Private Equity Monitor, which was launched in 2015. The most recent comments by ECB President Mario Draghi, who expressed readiness to further ease monetary policy if at all required, are likely to further support the optimistic stance of private equity firms. The persistent low interest rate policy is likely to continue channelling lots of institutional money into the private sector.

But there are also some warning signals in the market. In the current survey, financial investors' assessment of the deal flow (on a scale from 1 to 10) was only 5.23 – almost exactly in line with the long-term average. Yet in view of constantly increasing competition amongst private equity houses and record inflows into the sector, the market should be growing significantly – continuing the trend seen in the previous year, when the German mid-market (covering transaction volumes between 50 million and 250 million euros) recorded 47 buyouts with an estimated aggregate volume of 4.8 billion euros – more than ever before. As the chart below shows, this was a consequence of the strong deal flow between mid 2017 and mid 2018. Since then, the deal flow has been slowing down, which is likely to hamper further market growth over the next six to twelve months. 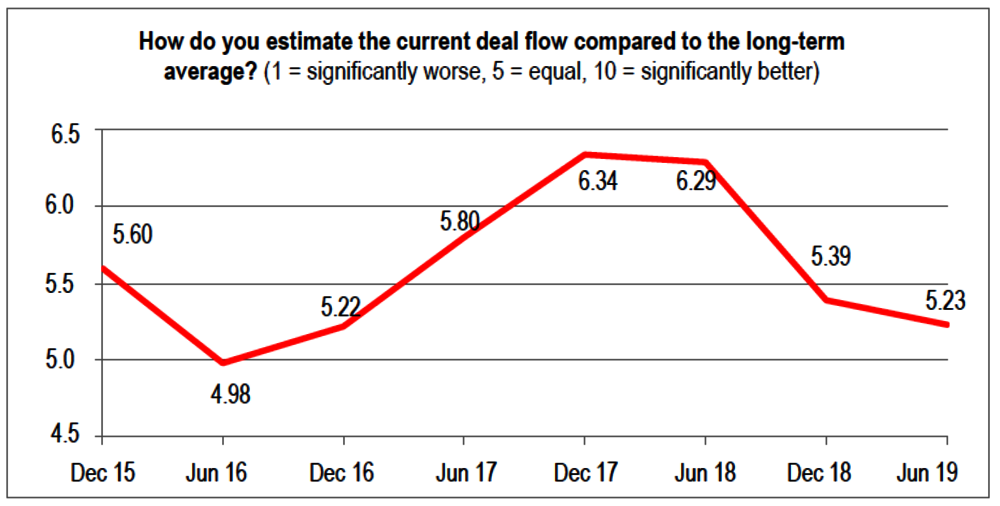 This leads to the conclusion that investment managers are mindful of macroeconomic uncertainty: "Geopolitical and macroeconomic volatility – triggered by tensions in the Persian Gulf, or trade conflicts, for example – raises uncertainty. This may complicate M&A pricing, burdening market dynamics at least temporarily", Torsten Grede added.