Frankfurt/Main, 17 January 2020 – The private equity sector is worried about the performance of its portfolios in the face of an impending recession and expects more restructuring work for 2020. This is according to a recent survey conducted amongst investment managers at more than 50 private equity firms active in Germany. The firms are polled every six months by FINANCE magazine about trends in the German private equity market, on behalf of Deutsche Beteiligungs AG. The survey also showed that a more sombre economic environment is weighing on the deal flow. The question now is: is the sector better prepared this time than it was in 2009?

In summer, the threat of trade conflicts, the chaos of Brexit and the already muted economic outlook seemed to have little effect upon the private equity sector. Six months later, sentiment amongst investment managers has changed considerably; an overwhelming majority of 80 per cent of the respondents fear that the industrial recession and weaker growth will impair the performance of private equity portfolios in 2020. Ten per cent even expect a “strong” impairment. The numbers leave little room for optimism, as only ten percent of investment managers believe that their own portfolio will not be impacted negatively by the recession.

As a consequence of these expectations, private equity firms expect more restructurings in the new year. 70 per cent of the portfolio managers surveyed foresee more restructuring work for 2020 vis-à-vis 2019, while eight per cent expect significantly more restructurings. Not a single private equity firm surveyed believes that restructurings will decrease. Torsten Grede, Spokesman of the Board of Management of Deutsche Beteiligungs AG, said: “In such an environment, expertise is more important than ever – long-standing fund managers are crisis-tested. It is important that various performance scenarios for a company and its market are considered as early as the acquisition stage and are then taken into account in the financing.”

Opinions differ as to whether private equity is better prepared for the downturn now than it was in 2009. 40 per cent of respondents believe today's portfolios to be just as vulnerable to impairments as they were in 2009. 23 per cent consider them to be even more vulnerable, while 38 per cent take a more positive stance saying that their portfolios are less vulnerable today than they were prior to the financial crisis. “Our shareholders and investors clearly benefit from the fact that we improved our risk balance by systematically broadening our investment spectrum over the past years,” said Mr Grede.

The more sombre economic environment is also has a two-fold impact on the deal flow. First, survey responses regarding the deal flow again came in below previous record highs. Secondly, fears of recession seem to change the composition of the deal flow, as private equity investors are looking for less cyclical companies with digital business models or high-quality services. 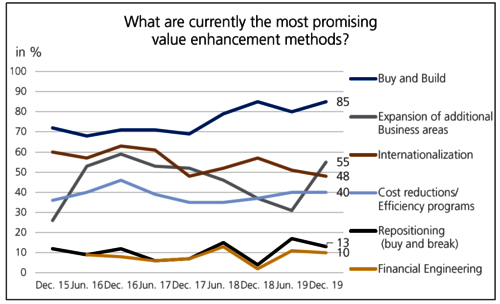 The survey suggests that buy-and-build as a strategy for value appreciation has increased in importance once again. 85 per cent of the investment managers surveyed named the strategy the best value appreciation method among six (see chart). There may be two reasons for this development: on the one hand, some companies may be more willing to sell in economically challenging times. On the other hand, current entry multiples force portfolio companies held by private equity firms to grow. Mr Grede explains: “We too use acquisitions as a catalyst for value appreciation. In the past financial year alone, one in four companies in our portfolio acquired at least one smaller company.”