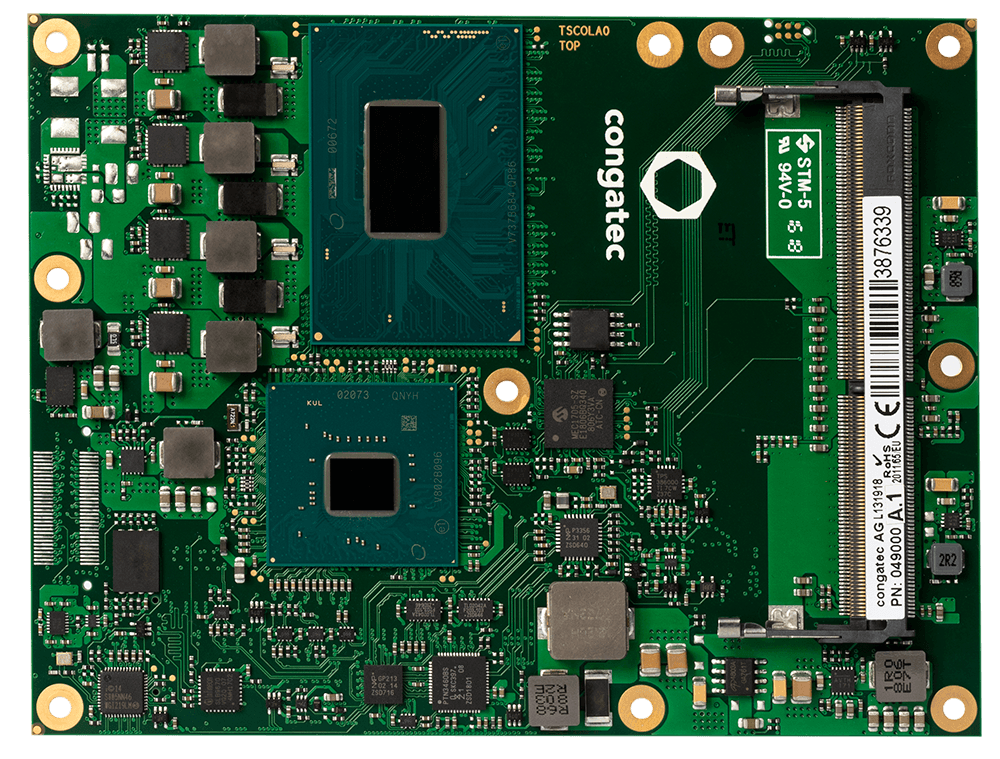 congatec is a rapidly growing technology leader in the highly attractive embedded computing segment. Together with the management, we would like to accelerate the growth course we have embarked on.

congatec Holding AG based in Deggendorf, Bavaria, is a rapidly growing technology company focusing on high-performance embedded computing products, so-called computer-on-modules (CoMs) and industrial single-board computers (SBCs). congatec focuses on CoM hardware design, which accounts for approximately 80 per cent of revenues. CoMs are deployed for specific applications within a larger system – for example, in industrial robots, image processing, or ultrasonic devices. Typically, CoMs must fulfil special requirements such as a high level of reliability and longevity (even under adverse conditions), real time processing, zero error tolerance, or small unit size. CoMs are not complete computing units in their own right – they comprise a processor, memory and the processor’s periphery, and are optimised for specific applications. The increased use of CoMs is essential for the ongoing digitization process, which increasingly requires computing power "on the edge", i.e. not in a central cloud, but closer to the application itself in order to reduce latency - among other things for the increasing networking of machines and networks, but also for applications in the field of artificial intelligence. In addition, congatec's RTS Hypervisor is an innovative software solution that can set new standards in terms of real-time performance - both as a stand-alone software solution and in conjunction with the CoMs produced by congatec.

Established in 2004, congatec is the global market leader in the computer-on-modules segment. The company has a wide-ranging customer base, from start-ups to international blue-chip enterprises. congatec has branches in the US, Taiwan, China, Japan and Australia, as well as in the United Kingdom, France and the Czech Republic.

Two-thirds of congatec’s customers are located in the European Economic Area; the revenue share of customers in the US and in Asia is growing . This trend is expected to accelerate in a market environment that is already growing at double-digit rates in the coming years. In addition to greater internationalisation, the planned growth initiatives include expanding the product range, e.g. by adding CoMs for new processor types or expanding software expertise. Strategically sensible acquisitions can also contribute to accelerating growth.

Tom Alzin joined Deutsche Beteiligungs AG in 2004 and became a Managing Director in 2011.

He holds a degree in Business Administration from the HEC Lausanne, and also studied at the London School of Economics and Political Science.

Tom Alzin has 15 years of experience in private equity. During that time, he gained a wealth of knowledge, particularly in the mechanical and plant engineering and in the services sector. Tom Alzin was involved in numerous acquisitions and realisations and also in the IPO of Homag. The realisations of Homag and Spheros, subsequent to their very successful development, are two of his most successful transactions. Tom Alzin also led the investment process in FDG, Pfaudler, Schülerhilfe, Telio, Polytech, duagon, Kraft & Bauer and Cartonplast and sits on the advisory councils of the companies, which are still part of the DBAG portfolio.