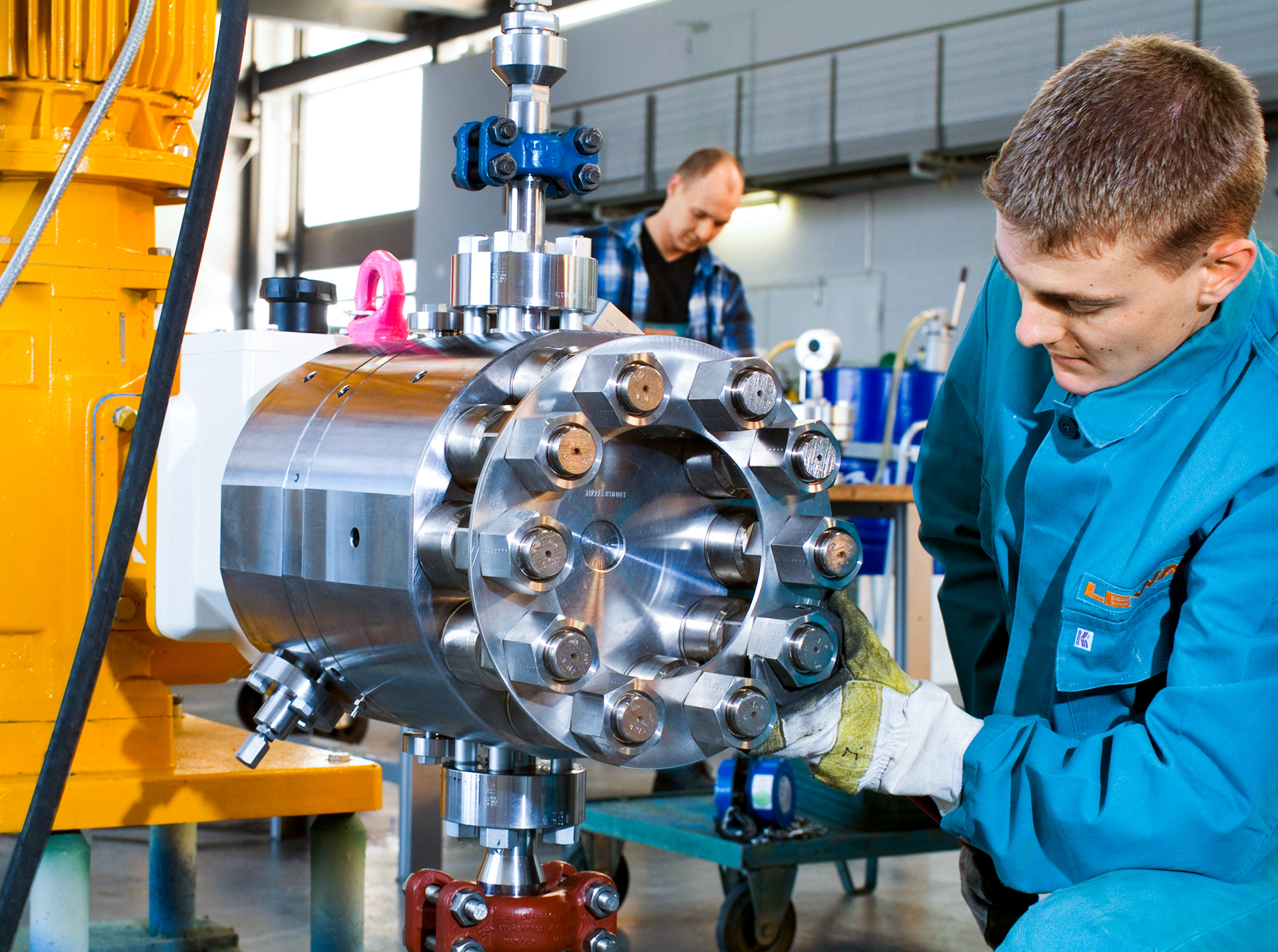 Pumps are among industry’s most underestimated machines. They are found wherever fluids need to be conveyed and metered – in the chemical, pharmaceutical and food sectors, and in the oil and gas industries. LEWA GmbH, a leading manufacturer of high-performance metering and process diaphragm pumps and complete pump systems, is at home in all of these markets. At crude oil or natural gas production sites around the globe, for example, LEWA systems pump fluids and additives up to 10,000 meters into the ground and help to protect against corrosion and the conveyed fluids from freezing. LEWA products also play a crucial role in next-generation energy and environmental markets. They are used to produce bio fuels and to compress and convey CO2 to underground storage facilities. The pumps and systems used in such operations need to handle pressures of up to 1200 bar and temperatures of up to 150 degrees Celsius.

Founded in 1952 as an owner-managed engineering office, the company, headquartered in Leonberg, Germany, develops, manufactures and markets high-performance metering and process diaphragm pumps and metering systems to customers around the globe. These technologically sophisticated products are particularly suited to mission-critical and safety-related processes. LEWA GmbH was already a technology leader in niche markets when DBAG, together with Quadriga Capital, invested in the company in a management buyout (MBO) in 2005. DBAG saw great potential in this sound Swabian Mittelstand company. Specialty pumps are fundamentally a growth market. By transferring its technology to other areas of application and entering new geographical markets, LEWA’s tried-and-true business model opened outstanding opportunities for growth.

For many years, LEWA had focused primarily on developing its products, thereby creating an excellent, sound basis for the company. Much of its potential remained untapped, however. Focusing on technology was no longer enough to put LEWA on a new path toward growth. Market and customer centricity also had to take a pole position, and a key objective therefore was to increase the company’s global presence in existing markets. At the same time, LEWA also needed to expand its expertise into new markets and industrial segments, turning it into business. New market potential was also to be had in the area of after-sales services.

Jointly with LEWA’s new management and with Quadriga, DBAG developed an economically viable strategy for LEWA’s future, simultaneously creating the platform to implement that challenging strategy in close cooperation with everyone involved.

LEWA considerably internationalised its sales organisation, which included acquiring a sales company in the US and establishing further sites in Norway, Singapore and Mexico. That made it possible to expand the company’s position in existing markets, such as the US, the Middle East and Asia, and to enter new markets, such as Russia and India. LEWA invested strongly in research and development to transfer existing technologies to other areas, such as the pharmaceutical and food industries, and to develop new products. The service and systems business was expanded, and the newly founded LEWA Academy centred more strongly on employee qualification. At the same time, the company used a number of key levers for considerably improving value-creation and administration processes, including in the areas of purchasing, controlling, production and project management.

DBAG and Quadriga sponsored the company until 2009. During that time, LEWA made excellent progress, surpassing forecasts and growing strongly. The company boosted revenues, increased the efficiency of its management and work organisation and became significantly more profitable.

A glance at the financials shows how successfully LEWA implemented its growth strategy: After growing by an annual average of 3.5 percent in the period from 1985 to 2005, revenues rose by 15 percent per year during DBAG’s investment. Earnings (EBITDA) even grew by almost 30 percent annually. The workforce also increased. At the time of the financial investors’ entry in 2005, LEWA employed a staff of 590, of whom 390 were located in Leonberg. In 2009, the staff totalled 730, with 440 working at the company’s headquarters.

Due to its impressive development and positioning through DBAG’s involvement, LEWA was an attractive candidate for acquisition by a number of strategic investors. After a round of negotiations, the decision was taken to divest to managements’ preferred partner, Japan-based Nikkiso Co., Ltd. Based on its leading technology position and excellent management, Nikkiso, headquartered in Tokyo, was the ideal organisation for joining with LEWA and creating a leading global pump manufacturer. The two companies’ geographical focus, major customer industries and key technologies complement each other outstandingly. In addition to pumps, Nikkiso manufactures medical equipment and aerospace products.

The new structures helped LEWA continue on its path to becoming one of the global leaders in process diaphragm pumps and sophisticated metering pump solutions. Through Nikkiso, gaps in the sales network have been closed: LEWA has gained access to the Japanese market and bordering countries – an enormous potential. Additionally, the company can sell the complete Nikkiso range via its extensive new sales network. These are optimal conditions for accessing all relevant markets around the world and serving a broader range of sectors. “The concluded investment was a success for everyone involved,” said Dr Rolf Scheffels, member of the Board of Management of Deutsche Beteiligungs AG. “LEWA solidified its market position, expanded its product portfolio, employed more people and achieved greater profitability.”

LEWA is a globally leading manufacturer of diaphragm metering pumps, process pumps and complete metering systems and plants. With 14 subsidiaries and more than 100 distributors, the company is present on all continents. LEWA now employs more than 1,000 people, and more than half work at its headquarters in Leonberg, Germany. In its 2015 financial year, LEWA generated revenue of approximately 220 million euros. Nikkiso, a Japanese pump manufacturer, acquired the company in 2009.