Mid-market buyouts in Germany in 2015: Financial investors’ focus was on industrial companies

Frankfurt am Main, 27 January 2016. Financial investors’ key focus has been on industrial companies. In 2015, chemical companies, automotive suppliers, mechanical and plant engineering companies, as well as the related industrial services providers accounted for about half of all management buyouts (MBOs) in Germany’s “Mittelstand”. Overall, the MBO market this past year declined slightly: the volume invested fell from 3.2 billion euros in the previous year to 2.7 billion euros; the number of transactions reached 30, following 31 in 2014. 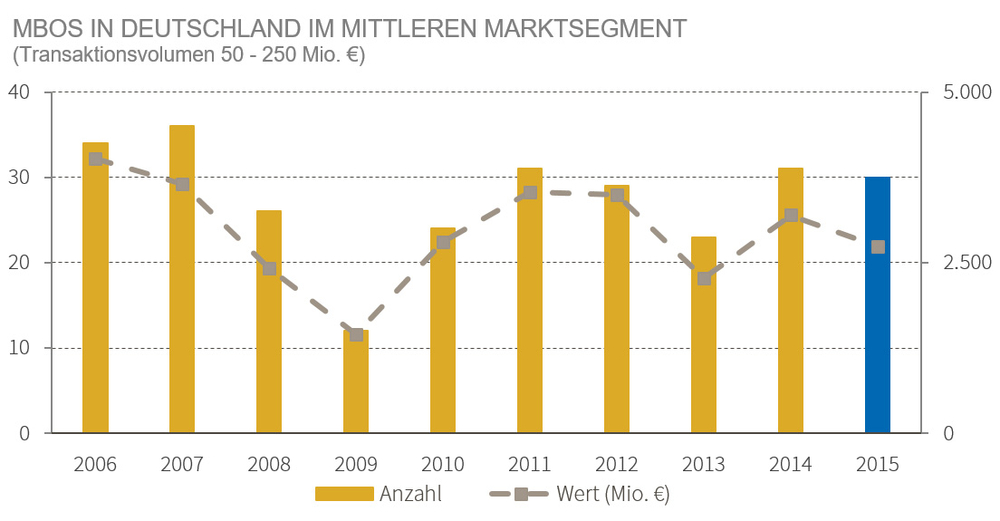 his is documented by the data issued today by Deutsche Beteiligungs AG (DBAG). The statistics relate exclusively to majority takeovers by financial investors, in which the target company’s management co-invests and which have a transaction value of 50 to 250 million euros for the debt-free company. The data is based on publicly accessible sources as well as on estimates and own research by DBAG in collaboration with FINANCE magazine.

The German MBO market is still characterised by a high proportion of primaries – buyouts in which a financial investor invests in a company for the first time. Compared with the preceding year  (19 out of 31 transactions, 61 percent), that proportion has increased once again.

“The high rate of primary transactions attests to the attractiveness of the German private equity market”, said Torsten Grede, Spokesman of the Board of Management of  Deutsche Beteiligungs AG, commenting on the latest data. “The structure of our economy with its strongly globalised “Mittelstand” differs from that of other countries”, Grede said. “The many companies that are leaders in their markets thanks to their product excellence attract strategic investors”, Grede went on to say. “In that scenario, investors from the US or China, for instance, compete with financial investors for attractive industrial companies, including ones from financial investors’ portfolios.” These target companies then do not turn into a secondary buyout, something that occurs in France to a much greater degree than in Germany. “That dampens the growth of the German private equity market.”

For 2016, DBAG assumes that there will be little change in the competitive environment. “Germany is one of the top destinations the world over for investments”, said Spokesman of the Board of Management Grede; this and the associated implications, such as rather steep prices, are unlikely to change in the near future.”

Deutsche Beteiligungs AG completed three transactions in 2015 and, as in 2013 (three out of 23 transactions) and 2014 (four out of 31 transactions), was one of the most active financial investors in Germany’s mid-market segment. Over an extended period of time, DBAG with its funds has also been among the leading sponsors in its market segment. In the past ten years, only one competitor has more transactions to its account than DBAG.